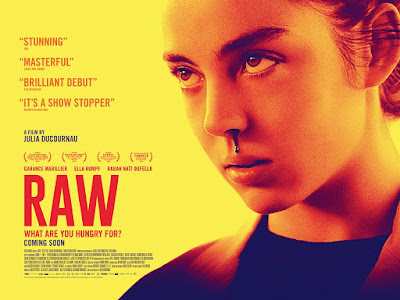 Youth is shackled with boundaries, both in place to restrict and protect. As we age, the ropes that bind us loosen and fall away. Pieces of ourselves that were previously hidden from us are revealed; in short, we evolve.

Sometimes, part of that evolution requires shedding who we were in lieu of who we might become. Perhaps our interests change. Our personality. And, as we transition, that which we desire.

RAW charts this path with impeccable care, daring imagery and all the discomfort one might expect to accompany real change.

RAW opens with a car accident. Someone walking on the side of the road and a car skidding into a tree, narrowly missing them. Moments later, the pedestrian stands up from the asphalt, seemingly unharmed and approaches the vehicle.

The feeling this scene serves to elicit is uncomfortable. Dangerous. Inconclusive out of context, but dread inducing all the same. Then, we meet Justine.

Justine (played by Garance Marillier) is a vegetarian, like her mother and father. She’s quiet, unassuming and repressed. Her overbearing mother handles any conflicts that may arise in her sheltered world and her father, well, seems nice enough, at least. Her parents receive no other name in the film other than their aforementioned relationship to Justine.

Immediately, by juxtaposing the opening car accident with an awkwardly quiet meal between Justine and her parents, the film creates a dichotomy between the mounting carnal desires that come with the transition from child to adult. Even as a bit of meat is revealed to have been lumped in with her mashed potatoes, Justine’s sickened response is marked with shame, not disgust.

Shame seems to be the currency by which Justine’s mother (played by Joana Preiss) trades in the film, shaping her daughter to her will. Vegetarianism is mentioned several times early in the film, something that Justine seems more controlled by than enthusiastic about. In fact, Justine doesn’t seem enthusiastic about much of anything. Her demeanor is timid and her general mannerisms weak.

Justine is, above all, without passion.

The narrative thrusts Justine into veterinarian school mercilessly moments after her introduction. An oppressively enormous campus that immediately serves to make her feel even more small than she already does. She’s left on her own, with the promise that her decidedly unreliable sister will pick her up and see her to her room.

From here, Justine is cast into an initiation process, hosted by the senior class that involves all of the types of torturous activities you could imagine the worst sort of frat-house would employ. Mattresses cast out of windows, midnight crawls through the dirt and the degrading type of verbal abuse that comes only from the most toxic masculinity.

All the while, Justine floats through these activities, a ghost of a girl, not necessarily uninterested in the sex and drug fueled proceedings, but utterly dumbfounded by what her place might be within them. Her inexperience, it would seem, may in fact be active avoidance of an inner truth that she’s never managed to face.

These early sequences culminate in a scene where Justine is forced to eat meat for the first time. The act feels painful for her. She is short of breath and nearly gags. However, as unpleasant as this initial experience may have been, she emerges shifted somehow. Changed. Desirous.

All around her, are displays of outward sexuality. The film makes a point of displaying Justine’s virginity on multiple occasions, often referring to the eventual act of sex as a “deflowering”. As she begins to turn away from vegetarianism, her body too transforms. Initially she is covered in a horrific, angry rash. As it fades, she continues her journey as a carnivore, but forces herself to be sick after her meals. The act of eating meat, the deflowering of her vegetarian stomach, has impregnated her with desire and, much like a pregnancy, that which is  growing inside her offers physical side effects. 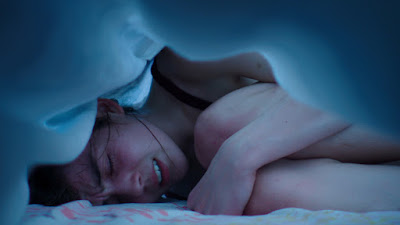 Justine’s relationship with her sister Alexia (played by Ella Rumpf) provides a window into Justine’s alternate self. A bombastic, extrovert, Alexia embraces her sexuality and is unashamed of their mother’s disapproval. For much of the film Justine seems subservient to her sister, that is, until an accident reveals to them both just how much common ground they share.

The supporting characters in Justine’s world each serve to offer her an experience. Her sister, by way of an accidentally severed finger provides the opportunity to taste human flesh. Her roommate Adrien (played by Rabah Nait Oufella) offers the exploration of her sexual appetites. Again, all of this sparked by the taste of something that had always been forbidden to her.

As her desire emerges, so does Justine’s willingness to embrace the sorts of careless, youthful exploits she initially disregarded. She embraces her sexuality. She seeks pleasure. Her sister continues to encourage Justine’s exploration of her self, slowly but surely teaching her to both embrace and control the dark desire she harbors.

Her sought after profession serves as a fascinating backdrop to her transformation. Images of Justine listlessly slicing into animal cadavers and observing the drugging and incapacitation of a horse capture her fascination with life and death, sparking curiosity that was previously masked as disgust. In one scene early in the film, several students sit at a lunch table and discuss whether or not AIDs began because a man decided to have sex with a monkey. Justine interrupts and tells them simply that the monkey was eaten, again drawing a parallel between the different types of pleasures humanity consumes and the dangers therein.

The film doesn’t seem to make a claim either way regarding Justine’s guilt or innocence on any sort of moral scale. Her sister Alexia is presented flatly as immoral, as she is the cause of the car accidents that spot the lonely road to the school (like the one that opened the film), in an effort to harvest fresh, human meat. Justine turns away from this behavior, refusing to accept that she and her sister are one in the same. This refusal ultimately causes yet more pain, as not only does it cost the life of someone she cares about, it erupts in a fight that leaves a nasty scar  on her face- marking her for what she is to all, forever.

In the end, Justine is left with confusion and angst. She has opened up her mind to the possibilities of the pleasure she seeks, the cost of which is higher than she can rightfully pay: physically or morally. More limitations. More repression. Growing up, it would seem, does not necessarily free you of the boundaries of youth. It merely expands them.

Justine is left with the inconclusive idea that her intelligence and ingenuity will allow her to birth a way of managing her desire. Coping with it. Repressing it.

Images of the vegetarian family, quietly eating their food without vigor or enjoyment come to mind at this idea. One imagines Justine considers the same fate.

However, she is changed. Her face is marked. Her eyes harder. Her desire clear. She has come of age. Been deflowered. After all, evolution is a permanent act.

She has shed her fear. Shed her shame. Shed her mother. And, speaking to her father about all that has come before, she finally understands the truth of growing up:


There is no going back.